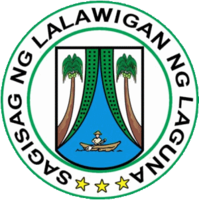 Laguna is a province in the Philippines, located in the Calabarzon region in Luzon. Its capital is Santa Cruz and the province is situated southeast of Metro Manila, south of the province of Rizal, west of Quezon, north of Batangas and east of Cavite. As of the 2015 census, the province's total population is 3,035,081. It is also currently the seventh richest province in the country.

in dry palay, in metric tons per hectare, yearly